AMES, Iowa – November 22, 2022 – John T. Ward, former President and CEO of Sullivan and Ward, a Des Moines based law firm, was inducted into the Iowa Cooperative Hall of Fame at the 2022 Annual Business Meeting of the Iowa Institute of Cooperatives.

“Throughout five decades, John served as counsel to many electric cooperatives,” says Dave Holm, Executive Director of the Iowa Institute for Cooperatives. “John not only served Iowa cooperatives but served nationally when he was selected by the National Rural Electric Cooperative Association to serve as a national instructor for legal seminars and continued in that role for 15 years.”

Ward grew up in rural Iowa five miles west of Knoxville in Marion County. He worked hard on the family farm milking 30 Holstein cows, feeding sheep and raising hogs and Hereford cattle. After earning his Bachelor of Arts degree from Drake University, he went on to Drake Law School where he graduated in 1964.

Ward immediately started working as a clerk for Wisdom, Sullivan & Golden Law Firm, which is now known as Sullivan & Ward. It was soon suggested to Ward to attend electric co-op board meetings and become familiar with co-op operations. He quickly found an interest in the cooperative world. For 56 years, he served as legal counsel for a large list of cooperatives and was a familiar face at board meetings, ensuring proper protocol was being followed as the cooperative’s attorney.

Among his many accomplishments, one of Ward’s proudest moments was his involvement in licensing the Duane Arnold Energy Center near Cedar Rapids. Iowa’s only nuclear power plant was commissioned in 1975 and is scheduled to cease operations later this year after 45 years of service. Ward is also proud to have assisted electric cooperatives with mergers and consolidations that continue to benefit member-consumers today.

“These inductees and their fellow members are great examples of the positive impacts Iowa cooperatives make daily across the state. We thank them for the time and service they have provided to their communities,” Holm says.

About the Iowa Institute for Cooperatives

The Iowa Institute for Cooperatives (IIC) has been lighting the way for cooperatives across the state since 1951, providing news and education while promoting legislative engagement, business development and value-added production for Iowa cooperatives. A proven business model dedicated to the success of its membership; cooperatives have fostered economic progress in Iowa for decades. Iowa Institute for Cooperatives members come from agriculture, credit unions, rural electric, rural telephone, farm credit, petroleum and more. To learn more, visit www.iowainstitute.coop 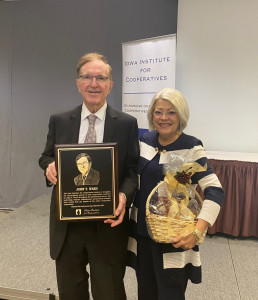 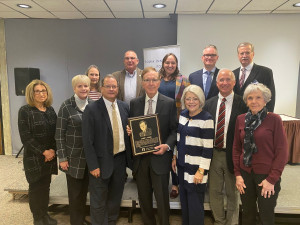